What is going on with Tom Brady and his retirement news?

Thank you to the New York Times for sharing some of this information below. I give you guys full credit for most of this research.

Yesterday at about 2:30 PM ET, ESPN’s Adam Schefter and Jeff Darlington reported that Tom Brady is going to be retiring after 22 seasons in the National Football League. At this point, I was preparing for an article about what Tom Brady meant for the NFL when he played. But later last night, after tributes on every social media account, KRON (a local news station in the bay area), reporter that Tom Brady Sr. (Tom Brady’s dad) said his son is not retiring! But this wasn’t the only clue though. TB12 sports made a twitter post with Tom Brady’s accomplishments and tagged him saying, Thank You @(Tom Brady’s twitter account). Tom Brady doesn’t make the twitter posts for TB12 sports. The tweet was deleted soon after it was posted. Hmm… interesting. The list just continues. But really, what is going on with Tom Brady and his retirement news?

“Without getting into the accuracy or inaccuracy of what’s being reported, Tom will be the only person to express his plans with complete accuracy. He knows the realities of the football business and planning calendar as well as anybody, so that should be soon,” Tom Brady’s agent Don Yee said Saturday. This is the probably the most accurate statement you’re going to see. Brady’s contract is up a year from now with Tampa Bay so if anyone besides his family is going to know his plans, it would be his agent.

Tampa Bay Buccaneers head coach Bruce Arians and his staff were unaware of Brady’s decision. While the NFL (National Football League), it’s also a media company and their trying to break the news, like ESPN, Fox and others. The NFL league was not informed about Brady’s retirement before it was reported by Schefter, Darlington and ESPN according to a league’s spokesman, Brian McCarthy.

Also, apparently Tom Brady contacted the Buccaneers general manager Jason Licht and told he he had not made his final decision on retirement.

Now, this is crazy! This is a lot of sources/people coming out and saying how they had no notice about the decision before it was reported. Something weird though that happened  is that all of this came out. It happened all in the span of 4 or 5 hours. Now, you can think of this 2 ways. 1, Brady told everyone to report this information out at the same time. Or 2, they all said the truth right after they heard this news they were not aware of and though they would of been aware of. To me, there are 2 theory’s about this news:

For someone who thinks 1 is correct:

The evidence above that Chase explained (3rd person), shows that Brady is not retiring. Brady said he would only retire when his play decreases and he led the league in passing yards and passing touchdowns this season. If Brady’s retiring then he would of announced it himself before anyone else!

For someone who thinks 2 is correct:

The evidence above that Chase explained (3rd person) is true but it’s doesn’t mean Brady is coming back for another season. They all announced it at the same time so it probably means Brady told them to do that. He probably wants everyone to stop talking about it so sometime this offseason, he can announce his retirement himself and get all of the attention for it.

All of these statements are true. There is one more piece of evidence to support 2. Tom Brady was on his “Let’s Go!” podcast with Jim Gray recently and was talking about how he wants to be there for Gisele (his wife) and his kids and that the decisions he makes are not his decisions, they’re their decisions since they make decisions as a family. Well, Gisele reportedly said she was tired of seeing Brady get hit and she wants to see Brady be there for their kids. But what do I think?

To me, I have a theory that adds on to 1. I think Brady might be doing this to get revenge over the deflate gate situation. In the AFC championship of 2014 that the Patriots won over the Colts, the theory was that Tom Brady deflated the football so that it would be easier for him to throw different passes.  The broadcasters covering the situation were very rude about it and how he cheated and all of that. But now, I think there is a possibility Brady is trying to get revenge on those media people and making them say false information about his retirement. If this is the case, I think Brady can still retire, he would just do it later this offseason toy try to make these broadcasters look wrong about the news at that point in time. This might not be correct but it is something to think about.

I saw Brady’s face after their divisional round loss to the Rams. Now, at least to me, it did not look like a ‘I’m retiring this offseason’ face. It looked like he wanted more. TB12 has always wanted more. He(‘s) won 7 championships, (has) made 15 Pro Bowl’s and (has) dominated the NFL for 22 seasons. Assuming he doesn’t want more means you’re not doing your research on Brady. But yet again, maybe it is retirement time. If that is the case, I will be very interested to see what the Buccaneers do with much more cap space and at QB. Would they move on to Kyle Trask or go a different rout? No matter if Brady retires or not, he’ll somehow find a way to win something. That’s what he does. But it is very interesting to think he might not retire and will go at it for an 8th Super Bowl championship! 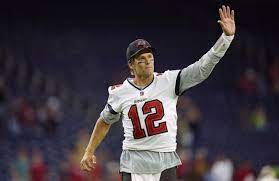 nypost.com has the right to the picture above