Yesterday, the Cincinnati Bengals came back from down 18 and beat the Kansas City Chiefs to move on to Super Bowl 56, where they will be facing the Los Angeles Rams, technically at home for the Rams. Obviously work only gets harder for the Bengals and they have to win 1 more game but it has been unbelievable what they’ve been able to do this season. What was the worst team in the league 2 years ago and a 4 win team last year, is now headed to the Super Bowl…because of 1 player that is on pace to have a legendary career!

Joe Burrow just 4 seasons ago wasn’t on NFL teams radar. But after 1 great season at LSU, Burrow became the #1 overall pick and his success continued in his rookie season. In 10 games before getting injured, Burrow put up 13 touchdowns and 5 interceptions, with a 65.3% completion percentage. Burrow showed value to his team though. He made everyone around him better. Tee Higgins, Tyler Boyd and C.J Uzomah’s successful seasons have been partly because of how Burrow was with them last season and this season. Also just with Ja’Marr Chase this season. But this season, wow! 34 touchdowns and 14 interceptions with a 70.4% completion percentage which led the whole NFL. He also led the NFL in average yards per play and average yards per completion. He did this while having an offensive line that had him sacked the most in the NFL for the most sacked yards this season. His ability to improvise is unbelievable. He took a team that was the worst team in the league, nothing and made them into something. And that something…is a Super Bowl appearance!

With a possible Brady retirement (http://chasessportsnews.com/nfl/what-is-going-on-with-tom-brady-and-his-retirement-news/) and guys like Rodgers getting up there in age, there is going to be a next generation of quarterbacks. That generation already has Patrick Mahomes, Josh Allen, Lamar Jackson, Justin Herbert and because of what he’s done, Joe Burrow. These 5 quarterbacks will be fun to watch for years to come. Joe Burrow is already making history with these guys. If he ends up winning a Super Bowl, he would become the 3rd quarterback ever to win an FBS championship and a Super Bowl…along with Joe Namath and Joe Montana. Not a bad group to be in! Joe Burrow is a special football player! 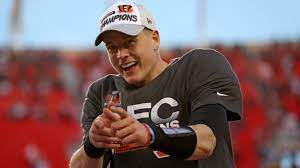 sportingnews.com has the right to the picture above

Big East Beast or Least: Going over some Big East teams and if they’re a beast or if they’re the least!What is going on with Tom Brady and his retirement news?
In
NFL