Big East Beast or Least: Going over some Big East teams and if they’re a beast or if they’re the least!

The Big East is always one of the most successful basketball conferences along with the ACC, Big 10, Big 12, Pac-12, SEC, etc. However, the Big East is arguably the best conference in college basketball. Today, I am going to break down every Big East team and tell you if they’re beats or leasts!

The Wildcats haven’t gone anywhere and neither has their success. The top team in the Big East has prevailed to a 16-5 record with a 9-2 Big East record! They have gotten some wins that aren’t given enough credit. They have beaten Big East teams consistently including an impressive wins over Seton Hall and Providence. They are also on a 3 game win streak right now. However, those games are against Georgetown, DePaul and St. Johns who have underperformed this season. They have also not been able to get a big win on a top ranked team. They lost to UCLA, Baylor, Purdue. The Baylor loss, a 19 point loss. They also have a 20 point loss to Creighton and a loss to Marquette in their pocket, something the teams below haven’t done. I think Villanova has a lot of potential to go far in this years tournament but I have much more confidence in the 2 Big East teams below them, having a chance to win the tournament. However, being 1st in the Big East isn’t anything to be ashamed of!

The Friars have surprised everybody this year. Under former Fairfield University coach Ed Cooney, Providence has excelled to an 18-2 record and the 15th ranked team in the country.  After a 14-1 start, Providence has not been worse. They continue to stack up Big East wins. What if I told you this team is 8-1 in the Big East, including wins over #17 Connecticut, #24 Marquette, #21 Xavier and #15 at the time, Seton Hall Pirates! This team has massive potential at a Big East tournament win and they are easily national championship contenders!

The Huskies have been up and down this season but a #17 ranking for Dan Hurley’s squad isn’t anything to be ashamed of. Despite suffering injuries to Adama Sanogo and Tyrese Martin throughout the season, the Huskies have a 15-4 record while being 6-2 in Big East games. Their 4 losses this season are to a top 15 team in the country, Michigan State in a close game, a very competitive West Virginia team without Sanogo and a beat up, injured Martin, to #15 Providence and to Seton Hall who was playing their best basketball at the time. I haven’t even mentioned that they beat Auburn who is the #1 team in the country and has been for a little while! Now, we’ve seen UConn have their bad moments, the close game against UMES and the struggle of being able to close games. But I still think this team is talented and has the potential to go very far in this year’s tournament. With Creighton, #12 Villanova, #24 Marquette and #21 Xavier Big East games on the schedule, we will learn who UConn really is. But for now, I think Hurley’s squad is a Beast 4/10.

Xavier has been a consistently good team this season. Despite a 5-4 conference record, they have a 15-5 total record. They have not beat a lot of great teams though. They lost back to back games to Villanova, went 1-1 with Marquette and lost their only game played to Providence. However, they are the classic, “Come up and beat who you have to beat” kind of team. And those teams are important. Now, they can obviously win a game or 2 in the conference tournament. But right now, I’m still waiting on them showing me they can beat a Top 15 caliber club for me to consider them Big East tournament contenders or national championship contenders!

The Golden Eagles have actually been Golden for most of the season! Yes, I know they went on a 4 game losing streak to UCLA, Xavier, UConn and Creighton but if you’re ever going to lose 4 games in a row, it would be to those teams. But this team 15-7 record and 7-4 conference record isn’t a fluke. They went on a 7 game win streak before their close loss to Providence. 5 of those wins though were against very quality Big East teams. I think Marquette continues to get better and has a strong chance to win the Big East tournament this year, which is very Golden like!

The BlueJays are a very inconsistent team. They have wins against Villanova, BYU and Marquette and losses to Arizona State and Colorado State. Now, this is why they have a 500 conference record and a 12-7 record overall. However, despite their inconsistency, I think this team has great potential to win the Big East tournament. Usually the team that wins the Big East tournament is an average to above average team that can get hot and win some big games. So even if it might look like a tight race for Creighton to make it in the dance, a Big East tournament is very possible for this inconsistent, 12-7 team that can get very hot!

The Bulldogs have never really been that great but they have shown signs of it. They are usually in very tight games and just have trouble closing them out. However, despite their loss to Texas A&M earlier this season, they have a 11-10 record and have been pretty competitive in the Big East! For example, they have been in close games with UConn but they just couldn’t close them out. Butler has a lot of potential and has a chance to win a game or 2 in the conference tournament. However, don’t expect much for the Bulldogs!

St. Johns, to me, has just no potential to win the Big East tournament and/or any games in March Madness if they get there. They just have no proof of being able to beat a good team. They are 1-5 against Providence, UConn, Seton Hall, and Villanova in the games they’ve played against them. Not the best. To me, the teams that have potential to win games have 1, beaten great teams and 2, had great stretches with consistent wins against at least reasonable teams. To me, St. Johns has neither!

The Pirates have just been way too inconsistent. To me, I see little difference between them and Creighton. 2 inconsistent teams that are usually good that have beaten some good opponents but also lost to some bad ones. Their also both 12-7! What a coincidence! The only difference is that Seton Hall’s has a little more big wins and little less bad losses. They have beaten what was #7 Texas and what was #4 Michigan but have also gotten swept to Marquette. They’ve also lost to Villanova, Providence. St. Johns and DePaul. So yet again, less bad losses. but still an inconsistent team with the same record as Creighton!

The Blue Demons have some wins to be proud of and some losses to not be proud of. They’ve lost to Butler and have beaten Rutgers and Seton Hall. They have also had close games against teams like UConn but they haven’t been able to close games. Despite their 9-1, 1-9 in Big East games have dropped them to 10-10. That 1-9 record in Big East games definitely hurts their credibility. But, considering they’ve beaten Seton Hall and had some close Big East games, I wouldn’t be surprised to see the Blue Demons winning a game or 2 in the Big East tournament, depending on who they play!

Some seasons aren’t your year. Well, this 2021-2022 season isn’t the Hoyas year. After a 6-4 start, we thought maybe they can make the tournament if they can win some Big East games. But they haven’t. They are 0-7 in Big East games and have lost their 8. A close game against Butler and single digit games against Villanova and Providence are the only things keeping them alive. Unless a miracle happens, it’s not looking good for Ewing’s team! 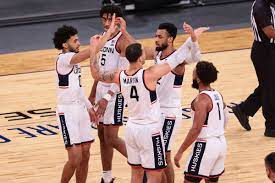 theuconnblog.com has the right to the picture above!

Tennis Tuesday: Rafeal Nadal over Daniil Medvedev in the Australian Open! Where does Nadal rank all time?Joe Burrow is a special football player!
In
NFL