After arguably the craziest round in NFL history, the Chiefs will welcome the Bengals and the 49ers will head to LA in a round that I think is going to be very exciting. You have 2 quarterbacks that are the present and the future of the NFL going at it and 2 division teams that continuously have crazy games when they face each other. Most of these teams are used to being in this scenario. This is Kansas City’s 4th season in a row making the AFC championship, 3rd year in a row hosting the round. The Rams were here a couple of years ago when they ended up beating the Saints and moving on to Super Bowl 53 to face the Patriots. The 49ers hosted the NFC championship 2 years ago when they beat the Packers and moved onto Super Bowl 54 to face the Chiefs. It might also be surprising to  some that for the 2nd time in 3 years, Tom Brady won’t be playing in a conference championship game. Now, he’s on the verge of retirement (learn more an article coming later today). In what should be 2 amazing football games, let me tell you who I think is going to happen in 1 of them, the Chiefs and the Bengals

To learn more about the 2 games today, check out the #4 Cool Sports Network where I previewed the games with Dexter Coburn!

I am very excited for this matchup. Patrick Mahomes and Joe Burrow going at it. To me, Kansas City minus 7 is very surprising. However, I also get where they’re coming from. Kansas City is coming off a win against Buffalo that has an argument to be called the greatest football game in the history of the sport. Part of me thinks though that Kansas City played such a tight but perfect game that they won’t be able to do that again against Cincinnati. Cincinnati also has more than 1 day more of rest and the attention hasn’t been on them. But, to be completely honest, I don’t know why they haven’t got any attention! They are coming off a big win, 19-16 over the #1 Tennessee Titans. Now, obviously making to the AFC championship is nothing to be ashamed of. I was right. I thought Cincinnati was going to make it here. But they’ve scored a combined 45 points in both games. Kansas City has put up 42 points in both games, 84 total points in the playoffs. If Cincinnati can’t score the ball at a high rate, this game is already over. Cincinnati has not had those large, 40 yard gains in the playoffs as much as they had in the regular season. Also, Mahomes has by far been a better quarterback than Burrow so far in the playoffs. I do a scenario where the Bengals win and the Mahomes outplays Burrow. But it would take a couple of steps:

Kansas City succeeds the most when they have large plays. They had a couple against Buffalo. Eliminating those would make the Chiefs run the ball more which is something they have not excelled at this season. They’ve done well during the playoffs but Darrell Williams is questionable for the game. If Jerick McKinnon has to run the ball every play for the Chiefs, their run game won’t be successful even though it has been so far in this year’s playoffs.

Cincinnati hasn’t had success running the ball so far in this year’s playoffs. They’re only averaging 74 rushing yards per game, barley half of Kansas City’s output per game. If Cincinnati can have a better run game with Joe Mixon than the Chiefs do with McKinnon then they could have a chance to win

However, the chances of these things happening are very slim. Cincinnati’s passing offense hasn’t got going in the playoffs and neither has their running offense. Now, we do need to pay attention to what these teams did in the regular season. Cincinnati had a much better run game than Kansas City in the regular season and their passing game was one of the best in the NFL. There is a strong possibility that this success can happen against the Chiefs. Burrow passed for 446 yards and 4 touchdowns against the Chiefs in Week 17. Ja’Marr Chase had 266 yards in that same game. That is the Chiefs weakness, their secondary. And even if Tyraan Mathieu plays, he’s beat up and injured so you have the chance for the big plays today. That is why this will be a close game. The weak secondary will not only help Chase have a great game, it will help guys like Tee Higgins and Tyler Boyd have good games. But the reason why the Chiefs will win is because Mahomes will not only be the best player on the field but the Chiefs running game will be better than Cincinnati’s. However, if Cincinnati wins the coin toss, I would elect to receive because I would make Kansas City come back and if they have to come back, it eliminates their running game. Cincinnati has a chance and it will be a close game but I don’t see Patrick Mahomes and the Chiefs losing. I think the Chiefs will win! 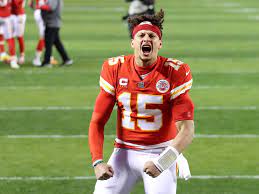 insider.com has the right to the picture above

What is going on with Tom Brady and his retirement news?Wiz Talk with Chase: Previewing the Wizards vs. Grizzlies Game! Morant Mania or Real Deal Bradley Beal?
In
NFL