The Washington Wizards head to Memphis Saturday night to take on the Grizzlies and All Star starter Ja Morant. That could be the smallest thing he’s awarded with this season! Morant and the Grizzlies are on fire! The Grizzlies are 15-3 in their last 18 and Morant is averaging 29, 7 and 7 in the 17 games he’s played in this stretch. That will be tough for the Wizards to handle. Washington is as cold as an ice brick. The Wizards have lost their last 4 games and their loss on Tuesday was close to an NBA record. The Wizards blew a 35 point lead that game to the Clippers which the 2nd biggest blown lead in NBA history! Good news for Washington, they haven’t played since Tuesday so not only did they have so much time to prepare, they had to hear about their loss for longer, which will probably aggravate them. These 2 teams faced off on November 5th earlier this season and the Wizards blew them out in what ended up being a 115-87 win. That was when the Wizards were one of the best teams in the league. Ever since then, the Grizzlies have been a much better team. With the trade deadline coming up and a lot of news surrounding the Wizards, let me tell you how I think this game will pan out!

I think there will be 3 players for both teams that will decide the game. Ja Morant, Desmond Bane and Jaren Jackson Jr. for the Grizzlies, Spencer Dinwiddie, Bradley Beal and Kyle Kuzma for the Wizards. Not coincidental that each player matches up with another player at the same position. It will be a PG, SG and PF night. Dinwiddie struggled on Tuesday and with the deadline coming up, he knows he has to play better for any team to want him considering he’s making over 20 million dollars a year. Ja Morant will always make an impact in a game since he is a top 10 player in the league this year in my opinion. The Wizards 3pt shooting defense get’s worse by the second and has been struggling for a while. That showed against the Clippers and that is why they lost. Desmond Bane’s close to 42% 3pt shooting will definitely make an impact in this game. The other shooting guard isn’t that bad either. Bradley Beal will be the main scorer for the Wizards tonight because of Bane’s lack of perimeter defense. Beal’s abilities will just be too much for Bane to handle. Jaren Jackson Jr. will have a great game because he will take advantage of Kyle Kuzma’s size at power forward. Jackson is much taller and is stronger than Kuzma so that disadvantage will make a difference. However, Kuzma will also take advantage of that when he’s on offense since Jackson’s perimeter defense is weaker and Kuzma is a good shooter and driver. These 6 players will make a big impact in this game!

Superman Sleeper: Thomas Bryant. The Grizzlies are much weaker at the center position with a shorter big man, Brandon Clarke, playing backup power forward and backup center. Steven Adams will be starting, paying attention to Daniel Gafford and won’t be able to guard Bryant. I could also see Montrezl Harrell filling this spot since he plays a similar role as Bryant. Not a lot of people talk about Bryant but he is a good player with a great opportunity to succeed today and he will. He’s my Superman Sleeper!

Prediction: Grizzlies pull it out in a close game

To learn more about this game, check out #135 Wiz Talk with Chase, which will come out about 30 minutes before tip-off on anywhere you get your podcasts! 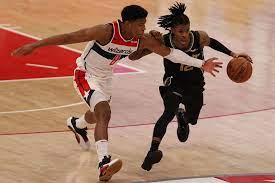 sportskeeda.com has the rights to the picture above