Why the Toronto Raptors will still beat the Philadelphia 76ers in this series!

The last 2 days, we have witnessed some great playoff basketball! The Mavericks and Jazz game went toe-to-toe with Luka Doncic out, the Timberwolves upset the Grizzlies and Jayson Tatum hit a buzzer beat to beat Brooklyn in Game 1. It has been everything that we have expected!

But a game that has been overlooked is the 76ers blowout win over the Toronto Raptors in Game 1 of the 4-5 matchup. I personally had Toronto wining this series in 7 games. And even after an 131-111 win for Philadelphia, I stand by that for a couple of reasons.

In the 76ers win, starting point guard Tyrese Maxey put up 38 points and was the key component in the game. Maxey has proven this season to not be any other point guard, to be a point guard you can sometimes rely. But he is very inconsistent, especially after 30+ point games: 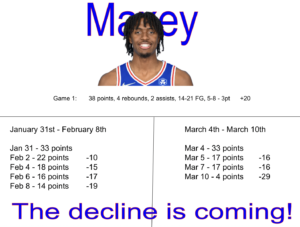 After 2 of Maxey’s 4, 30+ point games, his points have soon after declined dramatically. His other 2, 30+ point games were during his best stretch of the season all the way back in November. Assuming Toronto’s top 8 NBA defense won’t be able to stop inconsistent Maxey is unrealistic.

But what about the star, the new one in Phili. James Harden. Harden is a future Hall of Famer without a doubt. He’s a generational scorer. He’s one of my favorite NBA players. But he has struggled consistently in the playoffs. Below are his stat differences between the regular season and the playoffs according to basketballreference.com: 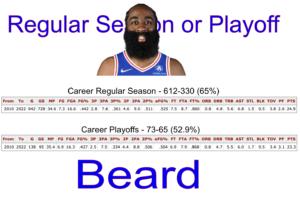 Harden’s stats decrease in PPG, TRB, AST, FG%, 3pt% and record/win percentage, which dropped by a drastic, 12.1% from the regular season to the playoffs! James Harden still puts up decent numbers in the playoffs but it’s worse than what he puts up the regular season, resulting in playoff loses when he is a key component to your team. Do you think it’s odd that the only time Harden has gotten close to a championship is when he was a #3, 10 year ago with the Thunder behind Kevin Durant and Russell Westbrook. I don’t. But not only does Harden lose more in the playoffs, he does it when he already has a lead.

James Harden has been up many times in the playoffs over the last couple of years. His team was up 3-2 on Golden State and blew it, ending their chances of going to the NBA finals. His team led over the Lakers in the 2nd round of the 2020 playoffs and lost. His team led over Milwaukee last season and lost. Harden struggles winning in the playoffs. That also doesn’t make me want to change my pick since I’ve seen this happen plenty of times before.

Haden also shot 6-17 from the field in this game, not surprising considering his playoff history.

There are others things as well. Danny Green, who has shot 38.4% from 3 in his playoff career just shot 0-5 from 3 for Philadelphia. And also assuming that the Raptors won’t get better is unexpected.

This and for the reasons I mentioned in my NBA playoff predictions article, tells you that the Toronto Raptors are going to comeback and beat the Philadelphia 76ers in this series!

What makes the Vegas Golden Knights championship run in 2018 so remarkable!The AFC is loaded!
In
NFL