What makes the Vegas Golden Knights championship run in 2018 so remarkable!

As an NHL fan, I am thinking about how insane this year’s NHL playoffs are going to be (covered on chasessportsnews.com). It made me think of the Washington Capitals’ 2018 Stanley Cup championship. That season, the Vegas Golden Knights made the Stanley Cup finals in their 1st season as a franchise. This season there was also an expansion team, the Seattle Kraken. However, they had not even close to the success of the Golden Knights in 2018. The Kraken through 74 games have 54 points, the 3rd worst in the NHL. But this is what is expected for a team in their first season that doesn’t have young talent through the draft, free agent experience, etc. That is what makes this Golden Knight’s run so crazy. Below is what makes Vegas Golden Knights championship run in 2018 so remarkable!

The Vegas Golden Knights were doubted all year during their 1st season. However, the VGK went 51-24-7 (109 points), good enough fo 3rd in the Western Conference and 1st in the Pacific division. They went on to sweep the Kings in the 1st round, beat San Jose in 6 and beat the Jets in 5, advancing to the Stanley Cup finals to play the Alexander Ovechkin led Capitals. As a Caps fan, I am very happy that the Golden Knights lost that series in 5. However, I don’t think anyone was disappointed by Vegas’ season.

Looking at the Western Conference now, filled with Conor McDavid, Leon Drisital, Nathan MacKinnon, etc. makes me think. The Golden Knights would have not that same success with the same team in 2022. That makes it so remarkable that everything lined up for the Golden Knights to succeed and they did. And then you look at the Kraken and everything hasn’t lined up. The Golden Knights had easily the best expansion team in NHL history: 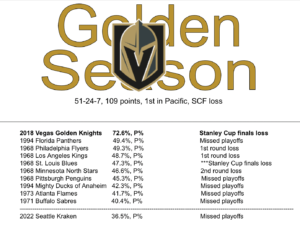 The Golden Knights currently sit 3 points behind the playoffs with 6 more games for them still to played in the 2022 season!

Why Marcus Smart deserved to be the Defensive Player of Year!Why the Toronto Raptors will still beat the Philadelphia 76ers in this series!
In
NFL