This year’s CSN NBA Bracket Challenge is going to be insane! Since I am not able to record a podcast at this time, I am going to go over my NBA playoff bracket below: 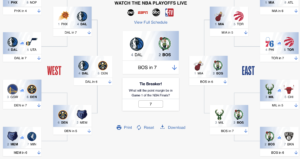 I think the 76ers will lose in 7 to the Raptors. The Raptors have the 5th best record in the NBA since January 29th. That is big. Pascal Siakam is good enough to lead a team and OG Anunoby will be a key perimeter defender on James Harden. The Raptors will move on to the 2nd round, but lose to Miami in 5 because of Miami’s depth, something the Raptors don’t have a lot of .

I think the Bucks will win in 5 in their first round matchup against Chicago. The bottom line is this, Giannis is easily the best player on the floor in this series and the Bulls don’t even have Lozno Ball’s perimeter defense to shut down Jrue Holiday and Khris Middleton. I can see DeMar DeRozan’s offensive ability being good enough to steal 1 game from Milwaukee but not 4. Give me Bucks in 5!

This is the best 1st round matchup of the playoffs. A rematch of last year in the 2-7 series, just in a different order. I think Boston will win this series in 6. Even if Ben Simmons comes back, it’s still been nearly a year since he played an NBA game. That would only ruin Brooklyn’s chemistry. Jayson Tatum is an amazing player and despite Robert Williams injury status, the Nets paint game is still a somewhat weakness. I think the Celtics will win this one in 6.

I also think Boston will beat Milwaukee in the 2nd round. Giannis will not play any better than Jayson Tatum and I see Jaylen Brown being a more valuable option on both sides of the ball compared to Jrue Holiday or Khris Middleton. I also think the Celtics guards will outplay Holiday due to athleticism. Give me Boston in 7!

I also think Boston will go all the way to the NBA finals, beating the Miami Heat. I think Jayson Tatum will easily be the best player on the floor. I also think Tyler Herro will slow down because of Marcus Smart’s defense, giving Miami only Butler and Adebayo to beat the entire depth and star power. That won’t work. Give me Boston in 6, advancing them to the NBA finals for the first time since 2010 and get revenge from their ECF’s loss to Miami in 2020.

I think the Mavericks will squeak by Utah in 7. The Luka Doncic injury does shake things up for sure. However, he is only supposed to miss probably the first 3 games of the series. I also think Spencer Dinwiddie can steal a game from Utah when Doncic is hurt. Dinwiddie put up great numbers and wins when Bradley Beal was out in his time with Washington. He can also do that with a better team that fits him well. I think that Doncic will come back, only down 2-1 and lead the Mavericks to a 1st round win.

They will also beat Phoenix to advance to the WCF! While Phoenix has been amazing, the Mavericks have a better record than them since the trade deadline and that is when Dinwiddie really joined the Mavericks. The Mavericks also have the best player in this series, Luka Doncic. While it seems crazy to not pick one of the most dominant teams in the NBA history to the finals, I will because of the Mavericks abilities.

I think the Nuggets will beat the Warriors in 7. The Warriors have been very inconsistent all season long and now are missing some chemistry because of Stephen Curry’s injury. Even though it looks like Jammal Murray is not going to play, Denver still has who should be the MVP of the NBA, Nikola Jokic. And Kevon Looney or 6’6 Draymond Green will have to guard Jokic. Not a great situation. Give me Denver in 7!

I think Memphis will beat Minnesota but watch out for the upset. Karl-Anthony Towns can outplay Jaren Jackson Jr., D’Angelo Russell can work his own offense and Patrick Beverley’s perimeter defense can guard Ja Morant. So picking Minnesota isn’t too unreasonable. But I like Memphis in this series. Ja Morant is still the best player on the floor with depth and I personally cannot have faith in Minnesota because of their inconsistency, beating a team like Memphis. I think the Grizzlies in 6.

I think Denver will then beat Memphis to advance to the WCF. Going back to Denver’s last series, they still have Nikola Jokic, one of the most dominant players over the last 4 seasons. Denver also has depth like Will Barton, Michael Porter Jr. and others. I also don’t think a young, in-experienced team can beat someone who’s about to win back-to-back MVP’s. Give me Denver in 5!

Denver’s run will come to an end, however, when the Dallas Mavericks advance to the 2022 NBA finals. This series is questionable on who the best player on the floor it. Michael Porter Jr. will be guarded by players like Dorian Finney-Smith who are great perimeter defenders. Jokic will have a lot of room to operate but so will Luka. I think the Mavericks just have the better overall team and will move onto the finals because of it, beating Denver 6!

I’m not surprised that I ended up picking this NBA finals matchup. Both teams rank top 3 in records since January 1st, January 29th and February 11th. Both teams have a superstar, Jayson Tatum and Luka Doncic. Both teams have a #2 that fits well, Jaylen Brown and Spencer Dinwiddie. What’s the tiebreaker. Boston has a +132 point differential against the top 8 teams in the league this season! That’s unheard of. Not only has Boston won, they’ve dominated. Dallas hasn’t done that as much. People would say Boston isn’t a true championship contender. Some people will say they’ll lose in the 1st round. However,I haven’t doubted them all season and I won’t stop. Boston will win their first championship since 2008, taking their championship lead back on LA!

The NBA playoffs are insane! Let’s see what this year’s playoffs brings!

The AFC is loaded!Breaking News: Stephon Gilmore has signed with the Indianapolis Colts!
In
NFL