Is Lamar Jackson going to leave the Ravens?

The Baltimore Ravens have had some great players in their franchises history. Ray Lewis, Ed Reed, Johnathan Ogden, Terrell Suggs, etc. But outside of Jammal Lewis, Ray Rice and Joe Flacco for literally 4 games, they haven’t had an extreme offensive talent that can be an MVP candidate at some point every single season and truly revolutionize the sport like they have now with Lamar Jackson. The last pick of the first round in the 2018 draft has exceeded his expectations throughout his career. MVP’s, highlight real plays, 1,000 yard rushing seasons and a lot of other accolades. However, that player may be leaving.

Lamar Jackson’s contract extension has been on everyone’s mind for a while now. The Ravens have said repeatedly that they are ready to do a long-term deal with the 25 year old. However, Lamar has not signed the paper yet, nor picked up the pen. Now, despite no championships for Baltimore under the 4 year pro, he is more than just any other quarterback for the Ravens. They have built their entire system around 1 quarterback, him. So, his contract is worth as much if not more than any other contract on the entire roster. So, what would the contract look like?

Since he hasn’t won a Super Bowl yet, I don’t think it is right to sign Lamar to a 10 year, over half of a million dollar contract. Lamar just isn’t at that level yet. But, he deserves a lot of money. In fact, a lot of money. Bills quarterback Josh Allen signed a 6 year, $258 million dollar deal, about $43 million per year. Deshaun Watson signed a 5 year, $230 million dollar contract, about $46 million per year. Does Lamar deserve that kind of money? Well, none of those 2 won an MVP like Lamar has and they both have made it to similar places in the playoffs as Lamar in their careers. Also, the Ravens have their roster more built for Lamar Jackson than the Bills have for Josh Allen and the Texans had for Deshaun Watson. So, there is a great argument to be made from that perspective, that Lamar deserves more money than that!

However, Lamar still has some weaknesses in the passing game. He is coming off a season where he had 13 interceptions! Will this continue? Well, last season Lamar Jackson had a much bigger work load since the Ravens had a lot of injuries, especially for their running backs and offensive lineman. Assuming those injuries don’t happen again this year, Lamar’s interceptions will go down to about 6-9, which is what he had in his previous 2 seasons before 2021. So, Lamar probably deserves a 6 year, $283 million dollar deal. Even if it’s a little more or a little less money, that would be what Lamar is expecting, for the amount of value he shows to Baltimore. But, is there a possibility he leaves the Ravens?

To try to improve the team, the Ravens sent out Marquise Brown to the Cardinals in the exchange for the 23rd pick, which was traded down to #25, where they selected Tyler Linderbaum to improve the injured offensive line. Well, Lamar didn’t exactly like that. He was basically best friends with Brown, after growing up in a similar area in Florida. After the trade, Lamar tweeted:

Baltimore’s franchise player upset isn’t what Baltimore was going for. They were trying to improve the team. However, Lamar has no right to get upset about trading his friend who coincidentally was their #1 receiver, since Lamar didn’t even thrown for 3200 yards with him. Lamar has also made some comments about wanting to play with Cameron Jordan: 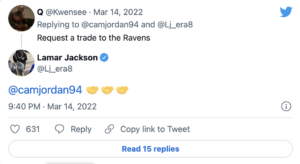 Then Ravens linebacker Patrick Queen responded to this saying: 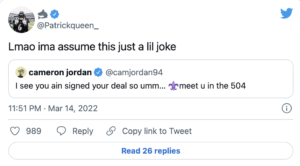 What do I think of this? I think Lamar Jackson is going nowhere. And I’m not just saying that because I’m a Ravens fan. It’s just simply the truth. The reasons why Lamar is doing that is to put pressure on the Ravens front office to sign him for more money. However, he has stated he wants to stay in Baltimore and win a championship there. He’s not going to leave a system completely built for his style of play and then go somewhere else and force that GM to do the same thing Baltimore did, which is very rare. Lamar is currently on his 5th year option to stay in Baltimore for 1 more season. However, if he doesn’t sign a deal and leaves somewhere else, the Ravens are done because of Lamar’s unbelievable value that only a handful of quarterbacks have ever brought.

How good is the Ravens secondary…actually?Are the Splash Brother Warriors back?
In
NFL