Wiz Talk with Chase: Previewing the Wizards vs. Bucks Game! Can the Wizards make a run without Beal?

Tonight, at 7:30 PM ET, the Washington Wizards will head to Milwaukee on national television and face the defending champion Bucks. However, this will probably not be a national television type game! You can call it, the 23-26 team who has last their last 5 games against the 31-21 team who are the defending NBA champions. Not to mention, the 23-26 team will have 2 of their top 3 players out for the game. Yes, Bradley Beal is injured for the next 2 games and the Wizards have decided to not play Daniel Gafford, most likely for trade purposes. But, in the NBA, anything can happen. What do I think will happen on Tuesday night?

Prediction: Bucks win in a blowout

To me, this game will come down to, how is Giannis Antetokounmpo playing? The former, MVP, NBA champion, Finals MVP, DPOY, etc is arguably the best player in the league. Now, if he is shut down, guys like Kyle Kuzma have proven to be able to score for the Wizards. If somehow the Wizards shut down Giannis Antetokounmpo, they will have a chance. However, Spencer Dinwiddie would have to take a big jump. However, he usually plays well without Bradley Beal. Spencer Dinwiddie has averaged 23.6 points, 8.2 assists, 5 rebounds and has 48.7/40.6/73.5 shooting splits in the 9 games he’s played without Bradley Beal this season. So, if Giannis is shut down, Kuzma comes to play again, and Dinwiddie is coming up and playing good basketball like he usually does without Beal, Washington has a chance. However, shutting down Giannis would take a great defensive jump from Thomas Bryant and Montrezl Harrell in the paint and guys like Deni Avdija and Rui Hachimura on the perimeter. Also a jump from Kentavious Caldwell-Pope if he guards the forwards today. However, he will probably be guarding more guards with Beal out. It might seem like a lot but if the Wizards can play that top tier defense to shut down Giannis and some not to crazy things happen, this may actually be a great TNT game. But it starts with the one strategy and that is to shut down Giannis!

Superman Sleeper: I think Corey Kispert could have a good game. Now, with Beal out, someone is going to have to step up and score. And I think it is possible for Corey Kispert to get some points on the board today. I think Giannis will not be shut down and that Milwaukee will take a big lead early. The way to come back from big leads is to shoot well from 3. And Corey Kispert has done that all 4 years in college and in the NBA. He is shooting close to 40% from 3 since January 11th. Kispert will have to take 3’s and he’ll make them, making him the Superman Sleeper for tonight’s game. I also think Davis Bertans has an opportunity to have a good game since he is also a good shooter who will get some time if the Wizards go d0wn early like I expect. 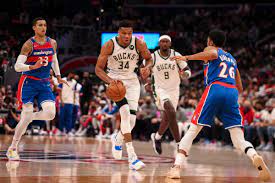 bulletsforever.com has the right to the picture above!

Wiz Talk with Chase: Previewing the Wizards @ 76ers Game! How will the Wizards close out their 3 game road trip?Tennis Tuesday: Rafeal Nadal over Daniil Medvedev in the Australian Open! Where does Nadal rank all time?
In
NFL