Wiz Talk with Chase: Previewing the Wizards @ 76ers Game! How will the Wizards close out their 3 game road trip?

The Washington Wizards head to Philadelphia Wednesday night to take on the Philadelphia 76ers, a team they’re 1-1 against this season. The last time these 2 teams faced off, the Wizards had a surprising 19 point win on MLK day afternoon while holding the 76ers to just 98 points. However, the Wizards are more beat up. Bradley Beal has officially been ruled out for the next 3 games after he missed last night’s game due to an injury he suffered on Saturday against the Grizzlies. Thomas Bryant also suffered a sprain ankle last night so he will not be playing. Even though they have been playing Daniel Gafford less minutes and some games no minutes, most likely due to trade purposes, I have to assume they play him since they need a backup and/or starting center. This also shakes things up for Washington’s hopes of making a trade with Bryant come February 10th (the day of the trade deadline). Will the Wizards take momentum out of their close game against the defending champs last night and use that to help them beat the 76ers or will Joel Embiid have something to say about that? Find out below my predictions for what will be a great game at 7 PM ET!

My Prediction: 76ers win in a tight game because of Seth Curry, Danny Green and other key shooters

A key thing in this game will be the play of the 76ers top tier shooters, Seth Curry, Danny Green, etc. While Washington only allowed 12 3 pointers at a 31.6% rate last night, they also allowed Milwaukee’s good shooters to succeed. Grayson Allen shot 40% from 3, Donte DiVincenzo shot 50% from 3 and Jrue Holiday shot 80% from 3. Allowing individual players to have that kind of success for their team in 1 aspect of the game is unacceptable. But, assuming Seth Curry (.403% 3pt shooter this season) and Danny Green (.394% 3pt shooter this season) can’t have that same success if not better is underestimating what they can do on a defense that allows teams to shoot 35% from 3 per night.  I expect both of them to make 3 or more 3 pointers and each of them will get around 15 points or better.

Superman Sleeper: I think Tyrese Maxey is going to have a good game and here is why. As you can probably tell, I think the 76ers will have a pretty efficient night shooting the ball. I also think a lot of their baskets will come quick. So, a lot of assists will be generated from the initial ball handlers who are finding players like Curry and Green for 3. Well, Maxey is the point guard and brings the ball up a ton. Yes, Maxey starts, Curry might and Green will come off the bench but they still do play a lot of minutes with each other. Maxey plays 34.6 minutes per game with Curry this season. That is really close to 72.1% of a game! And again, I think the 76ers will get quick 3 point baskets with players like him. Maxey might not do a lot scoring or rebounding but he will make a difference passing ball. He will generate a lot of assists because of the 76ers 3pt shooting and that is why he’s my Superman Sleeper!

If you want to hear more about how the Wizards have a chance to win this game, check out my podcast, Wiz Talk with Chase, that will post around 20-30 minutes before tip off! 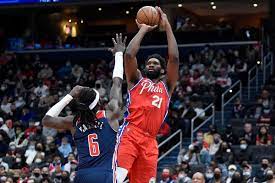 bulletsforever.com has the right to the picture above!

“Your next” Tom Brady on Lamar Jackson! Is TB12 right?Wiz Talk with Chase: Previewing the Wizards vs. Bucks Game! Can the Wizards make a run without Beal?
In
NFL