Breaking News: Russell Westbrook is getting traded back to OKC…I think!

This Just In: Russell Westbrook is getting traded back to the Oklahoma City Thunder! At least, I think he is! There has been no report yet. Or even rumor. But per chasessportsnews.com Russell Westbrook is coming back home. I understand you may think chasessportsnews.com, or their owner Chase Coburn, haven’t predicted any big time move or event in the world of sports. Well, I have predicted the NBA champion 2 years in a row, and may make it 3 if Boston wins the next 2 games. I also state that I predicted the Washington Capitals Stanley Cup championship, after 2 straight years of disappointment and failure in the playoffs. So, nothing crazy. But this is the start. Here is why it’s only a matter of time before Russell Westbrook comes home back to OKC!

First, what did Russell Westbrook do in his time in OKC. In his 11 seasons with the organization, Westbrook averaged 23 points, 8 assists and 7 rebounds, while winning 2 scoring titles, 2 assist titles and an MVP as well. He made the all star game 8 of his 11 years and made the All-NBA team 8 times. He also made 4 conference finals and 1 NBA finals with them, despite falling short of the ultimate goal of winning a championship. Some people do blame Westbrook though, especially when he shot 38% from field in the playoffs of his MVP season, which was 1 of 3 straight seasons he would average a triple double for them in the regular season. He also couldn’t win with a lot of talent like Paul George and Carmelo Anthony, which included giving up future all stars like Victor Oladipo and Domantas Sabonis to try to build around Westbrook and it didn’t work because of continuous lackluster playoff performances. If it weren’t for Sam Presti being a genius and mastermind, the Thunder may have been stuck in a bad situation for seasons after giving up those assets they accumulated, which were also from Presti’s incredible drafting as well.

Westbrook ended up getting traded to the Rockets during the 2019 offseason, for several 1st round draft picks. Westbrook may have not won a championship with the team. However, his success on and off the floor for Oklahoma City will never be forgotten. And they would always allow him back in OKC and would never decline a chance for him to come back to play for the Thunder. Or would they? They already welcomed him back to the city, by giving him a key to the city: 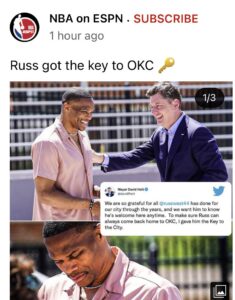 It makes sense. Russell did a lot of charity and events off the floor to not just become a sports figure in OKC, but a role model and hero to those who aren’t as privileged as many. We could have all expected this to happen but, why would they do this now and not do it right after he left, when tributes were going on in OKC to honor what he did for the team and the city? Well, that is because he is getting traded back to the Thunder.

Ever since Westbrook got traded away from Oklahoma City, everything has fallen down Mount Everest and he’s nearly at the bottom of the mountain. Westbrook still ended up making All-NBA 3rd team with Houston, but fell off a lot in the playoffs (partially due to injury and health and safety protocols). That next offseason he was traded to the Wizards where he had a horrific start to the season. And the Wizards were terrible. It wasn’t until late March when Westbrook and the Wizards started to pull it together, which was just good enough to get in as the 8th seed in the conference. But for the first time since 2014, Westbrook didn’t make the All-NBA team or All Star game that season. Then that offseason he was traded to the Lakers, which formed a big three of LeBron James, Anthony Davis and Westbrook. But this was arguably his worst season of his career, as he was benched in most games during the 4th quarter.

So, Westbrook has turned into a generational talent who was changing the game and making history into an overpaid bad shooter to most people. Once he accepts his player option worth over $47 million, he will become one of the 3 highest paid players in the NBA…for 18 points per game on terrible shooting splits. But I don’t think his decline is because of his age or skill. It’s because of how the Lakers used him. He wouldn’t have declined the way he did if he was in Washington last season, a team that still needed a primary ball handler. And there is a reason why Washington has not found a point guard since trading him. So, how could the Lakers front office get rid of Westbrook if nobody wants him? Well, some teams do.

Would Washington be an option? I mean, he was the May player of the month with the Wizards and led them to one of the best records in the NBA to close out the season. He was playing like an MVP. Well, unless Washington would want to give up a newly acquired, 26 year old, former all star big man with Kristaps Porzingis, the Wizards don’t have the cap room to make the trade work. But what about Oklahoma City? Yes, they are a serious option. Westbrook needs a place where he can regain his reputation, since after this season he is an unrestricted free agent. And no one would complain about more money! Oklahoma City would be a perfect fit for Westbrook. He can be a primary ball handler with Shai Gilgeous-Alexander and would be one of their best players since, well, the Thunder aren’t good anymore! He could put up great statistics and be welcomed back into the all star game in 2023. But how would Oklahoma City get him?

Well, they have a lot of cap space which is important. A team without a lot cap space would be able to have Westbrook, unless they give up big contracts to do so. But, that wouldn’t work since big contracts are usually great players and Westbrook’s reputation isn’t that anymore, even though he could get back to that in OKC. And OKC doesn’t have any big contracts. But why would Oklahoma City want him, unlike most teams. Well, it would be great to have a veteran in the locker room to mentor the players from a leadership and mental standpoint. His 5 star IQ and precise vision and passing would be good to develop forwards like Kenrich Williams, Lu Dort, Jeremiah Robinson-Earl and Darius Bazley with their shooting and overall offensive game. Shai would also get many more open shot opportunities, which will improve his development. I would expect Westbrook to regain his all star form and sign a contract, probably 2 or 3 years worth $45-65 million with a contending team to try to get a championship! The Thunder would also trade for Westbrook to free up the money from Derrick Favors contract to have $10 more million to spend or save for free agency.

In this trade, the Lakers would get Derrick Favors, to finally get a backup center, with Anthony Davis either injured or refusing to play the position. This trade would make sense for both teams and most importantly Westbrook. I understand Lakers new head coach Darvin Ham said he thinks he can use Westbrook in a very positive way and play a pivotal role on the team. However, the Wizards also said that they wanted to keep Bradley Beal since John Wall was becoming healthy and they wanted to keep Wall to see his connection regained with Beal. Yet, just weeks later Wall was a Rocket. I expect Russell Westbrook to get traded to Oklahoma City and it will regain his reputation and even if it’s not JUST IN like Max Kellerman would like to say, it’s not a long time until it does happen. Westbrook has gotten the key to the city, and the key that allows back to where it all started!

Are the Yankees the best sports organization of all time?NBA Finals 2022 Game 5 Preview: Will my prediction be in jeopardy?
In
NFL