Are the Yankees the best sports organization of all time?

I heard on “This Just In” hosted by Max Kellerman this afternoon, Kellerman say something that as AM Hoops would say “Makes ya go hmmm”. Kellerman said that his favorite baseball team, the Yankees, are the greatest sports organization of all time. There was not much talk about it, as Kellerman was more trying to center the topic around how impressive the Lightning winning 3 Stanley Cups in a row would be. But, it did make me think, are the Yankees truly the best sports organization of all time? Because well, they have the most championships, but baseball has also been the longest active sport. S0, how could I figure this out.

Before we get into championships, I would like to state the teams I am putting next to the Yankees. I am taking the leading championship getter from every sport, which for basketball is obviously the Lakers and Celtics and for hockey is easily the Canadians. Even though the Cowboys and 49ers are hovering right below with 5, I chose to put the Patriots and Steelers into this debate, with an NFL leading 6 Super Bowl championships. Before comparing championships, off of the top of my head, who would I put as the greatest 3 sports organizations of all time?

I would say the Celtics, Lakers and of course the Yankees are my top 3. And their coincidentally all in big markets. All organizations have rarely hit mediocrity, except for some rare seasons. In fact, these organizations are really respectable. The Yankees have made the playoffs 57 times out of 116 winnable World Series. They have won the World Series almost half of that time with 27 championship trophies on the mantle. Those playoff appearances and World Series is easily better than any organization in the MLB, with the Dodgers right behind them in playoff appearances (35) and the Cardinals behind in World Series wins with 11. But, the Yankees aren’t the only organization to dominate their sport.

The Celtics and Lakers are clearly the best organizations in NBA history and frankly there’s no competition. Their 17 NBA  championships is the most by a mile, followed by the Warriors and Bulls with 6 championships respectively. The Lakers have made the most playoff appearances ever with 62, followed by Boston with 59. In fact, that is much more impressive than the Yankees. The Lakers have made the playoffs in just under 83% of seasons and the Celtics have made the playoffs in just under 79% of seasons. That number for the Yankees falls down to 49%. I understand the MLB has been along for longer but that is a drastic drop off. But can the Yankees lead in championships outplay the success of Boston and LA in basketball? Or, do they have an advantage?

Even though in that statistic, the more playoff appearances seems diminished for New York, it also doesn’t make sense since they have many more championships than the Lakers and Celtics with 27. But, again, the MLB has been around much longer than the NBA, meaning that 10 championship increase to the Yankees doesn’t mean much? Or does it? Because, 17 out of 75 sounds a lot better than 27 of out 116. But, it’s actually not, but by very little. If the Lakers and Celtics played 116 seasons, they would be on pace for 26.2972 NBA championships. Which, is crazy to say, is less than New York’s 27 rings. In fact, since every single professional sport has played less seasons than baseball, I found out how many championships all of the teams I chose at the beginning would win in 116 seasons. This is how my list turned out:

What stood out to me from doing this experiment is how the Patriots and Steelers did. They had under a half of what every other organization accomplished. Which, now that I think about it, makes sense. I remember right when COVID hit America, Stephen A. Smith, Max Kellerman and Marcus Spears were debating who the most valuable athlete in sports was. They narrowed it down to LeBron James and Patrick Mahomes, even though the majority of Max’s case brought up Kawhi Leonard to try to diminish LeBron’s success compared to Mahomes’.

But, what they all agreed on is that an NBA superstar has more influence on the success of their team than an NFL superstar has on their team. That is because the NFL is more centered around building a great overall team. Patrick Mahomes and a bad offensive line would not make the playoffs, but LeBron James and a pile of trash in Cleveland made the finals in 2018. What this NFL case points to though is that building a team is harder than getting a star, which means to have a successful team for such a long time without dropping down is usually unheard of. What Tom Brady and the New England Patriots did over almost 20 years, winning 6 Super Bowls was unbelievable and will probably never happen again. But this point describes how the NFL has much more parody than any other sport. So now that I thought about it, it makes much more sense to see the NFL teams have this low of a championship total in my experiment.

Something else that surprised me is that the Montreal Canadiens are the closest team, championship wise to the New York Yankees. So, does that bring some more teams into the discussion? Well, I don’t think so. The only team I could consider putting back on this list would be the Canadiens, considering the dominance they had early on. Between 1944 and 1779, the Canadiens had 18 Stanley Cup titles. That means they won 51.43% of Stanley Cup championships in this 35 year stretch. However, they have only won 1 Stanley Cup in the past 42 seasons. That is only 2.38% of the Stanley Cup championships during this time. The fact that they have only won championships when there were limited teams and have yet to win multiple championships once more teams were added does not prove much.

The Yankees, Celtics and Lakers all went on a good stretch with limited teams but they have also had recent success. The Yankees won 20 World Series in 30 seasons from 1923-1962. That is 66.67% of World Series in this stretch that went to them. They’ve also done a good job since, winning 4 championships over the last 23 seasons. It may the dominant force of the Yankees in the 20’s, 30’s, 40’s, 50’s and 60’s, but winning about 17.39% of World Series in a 23 season stretch isn’t disappointing at all. The Yankees have also made the playoffs 20 times during this 23 year stretch.

The Lakers have also had dominant era’s. They won 5 out of the first 6 titles that were an organization. They also made it to the finals 8 times from 1959-1970, despite losing all of them to their rival, Boston Celtics. They also won 5 championships from 1980-1989, making it to the finals 8 finals in this 10 year stretch! They also completed a 3-peat with Kobe Bryant and Shaquille O’Neal to start to the century, and also won 2 more with Kobe in 2009 and 2010. In fact, from the start of their organization until 2013, the most amount of years the Lakers missed the playoffs in a row was 2! In fact, this chart says it all: 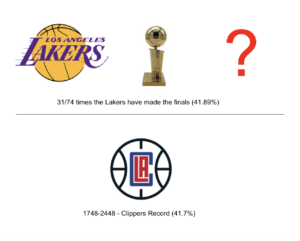 The Lakers made finals percentage is higher than the Clippers winning percentage! I’m not sure if that explains the Lakers are really good, if the Clippers are really bad, or maybe a combination of both. But I do think we can agree that one team owns LA much more than the other. But, after doing my research, I have come to my conclusion on who I think the greatest sports organization of all time is: the Los Angeles Lakers! The way they’ve dominated from the start and the way they’ve been able to win championships is unbelievable. They dominate every statistical category. In fact, in my top 10 players of all time, 6 of them have played and won championship(s) with them. The’ve accumulated all of the talent and won more than any organization, even if the my estimated championships system says otherwise. The Los Angeles Lakers are the greatest organization in the history of professional sports, so yes, not the Yankees!

Breaking News: The Mavericks are finalizing a deal to bring Christian Wood to Dallas!Breaking News: Russell Westbrook is getting traded back to OKC…I think!
In
NFL