Why this is happening and there is no way to stop it…sport popularity!

I respond to a lot of YouTube polls to see what viewers are thinking. Recently I’ve responded to a lot about the NBA Finals, or where Stephen Curry would rank if he wins another championship and Finals MVP. But I came across this one that was right up my alley. Sixringsofsteel posted a poll saying “Best player in Washington D.C right now?” For those of you who know me, I am a die hard Capitals and Wizards fan. But despite not being fans of the Commanders and Nationals, I am very capable ranking those players as well. The 4 options included Terry McLaurin (WR, Commanders), Bradley Beal (SG, Wizards), Juan Soto (LF, Nationals) and Alexander Ovechkin (LW, Capitals). I voted for Alexander Ovechkin, who is one of the greatest hockey players in the history of the game. But this (after 22k votes) is what the results ended up being: 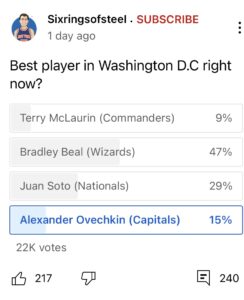 Surprisingly, Bradley Beal ranked #1, ahead of the greatest goal scorer in the history of hockey and currently one of the best players in baseball. But, this doesn’t make sense. I understand Beal is about to sign a 5 year, $250 million dollar contract. However many people, including yours truly, have extreme doubts about that. I’ve mentioned countless times on Wiz Talk with Chase that Beal has not proven to be a #1 player on a championship team. Yet, he is going to make that money.

Juan Soto is an exceptional baseball player. He made his 1st all star game appearance last season, with 29 home runs and a .313 batting average. The year before, despite a shortened season, Soto proved how good of a player he was. He led the MLB in batting average (.351), OBP (.490), SLG (.695), OPS (1.185) and OPS+ (217). This season he is also playing great baseball. In fact, he’s on pace for about 33 home runs. But a skill that goes unnoticed for Soto is his ability to draw walks. He led the league in Bases on Balls/Walks and is leading so far this season. That is why his On Base Percentage (OBP) is always one of the best in the MLB. He was ranked the 3rd best player in the MLB coming into the season according to ESPN!

Talking about Ovechkin’s greatness is very easy, especially for a die hard Washington Capitals fan. Ovechkin had another 50 goal season, making this the 8th time he’s accomplished this feat. He’s been an all star player for almost his entire career. He also had his career high in points since 2010, this season with 90. There are not many advanced stats to describe a hockey winger and his ability to score. But he was the key reason why the Capitals made the playoffs and is continuing to put up all star level seasons.

And yet, the player who only averaged 23 points while shooting 30% from 3 on the 12th ranked Eastern Conference team, is the best in DC according to this poll! Why is this? Well, a lot of Sixringsofsteel viewers are NBA fans, since his channel is centered around NBA content. Is that why? Possibly. But, I have a different reason. Sport popularity. As you can see, Soto and Ovechkin are much better players than Beal and dominate their sport more. But the popularity of the NBA comes into a factor here. Let’s look at some ratings for the NBA Finals:

This chart was made in 2016. But let’s look at the highest viewed years on this chart. 1987 included what ended up being the final playoff matchup between Magic Johnson and Larry Bird. The 1991 finals was Magic Johnson against Michael Jordan, in what NBA fans like to call the series where Magic handed the throne to Jordan. For the 1993 finals, it was Michael Jordan against NBA MVP Charles Barkley. And in 1998, it was Michael Jordan’s final ever NBA finals! Even though the numbers haven’t been as high recently compared to the 1980’s and 90’s, it is because Michael Jordan’s looks, abilities and endorsements rose the popularity of the NBA. But, this chart shows the NBA is actually getting more popular as time is going on: 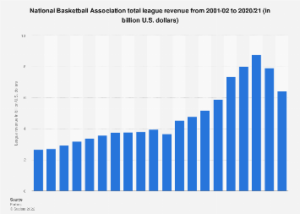 Now, you may be thinking “Of course the revenue is going to go up, since the value of 1 dollar has became less and companies seem to earn more and more money than they did back in the day”. Well, that may be part of the equation. But the next part, is endorsement deals. NBA shoes and shirts from star players are in almost every athletic equipment store in the world. But you also need to remember, baseball and hockey don’t have that. There are no specific, athlete created, popular shoes in the baseball market. Or any athlete who popularized skates out there for hockey. But there is for basketball due to the way the sport is played.

Even think of it from a more basic spectrum. There is a basketball court in nearly every park and school recess playground. There is no ice rink or baseball field in every park or school recess playground either. That just has to do with how the sport is played. I am personally someone who enjoys watching most sports, including the 4 sports that were in Sixringsofsteel’s poll. But, that is not the case for everyone. Basketball is able to produce more superstar branding deals than any sport in the world, because of how popular the sport actually is and its ability to be played anywhere at anytime. Baseball and hockey have produced some great stars in their leagues, like Babe Ruth, Barry Bonds or Wayne Gretzky. But the NBA had that 1 player to popularize the game, Michael Jordan, who made an impact on and off the floor with his basketball play and endorsements deals. And the way the different sports are played separate’s 1 from the next.

Another reason for this, is offense. There is more offense in basketball than any other sport can physically produce. In basketball, you have a 24 second shot clock and every team goes back and fourth on offense and defense sometimes within or after that time. So, more possessions means more scoring. Baseball and hockey aren’t like that. In hockey, the game also goes back and fourth but there is less scoring, since there are goalies. In baseball, some teams struggle to get 1 hit per inning and even if they do, a single only gets that player 1/4 of their way to scoring. But more scoring also means more highlighting plays for superstars, which produces more popularity, which also means buyers would want to buy more items from the player’s brand and endorsements.

So, there could be a couple of reasons on why Sixringsofsteel’s poll turned out the way it was. But I think the main reason why Beal ended up #1, was because basketball is dominating the popularity of all sports, and it’s not even close. And to be honest, there is also no way to stop it. The style and offensive opportunities of baseball and hockey aren’t going to change. If not, it would be considered a completely different sport. I am someone who personally enjoys almost all sports. But for people who like sports but only particular ones, basketball is that sport. Who knew a sport that kept losing popularity, just needed 1 player to popularize the game on and off the floor!

NBA Finals 2022 Game 2 Preview: Must win for the Warriors?Tennis Tuesday: The game for the GOAT?
In
NFL