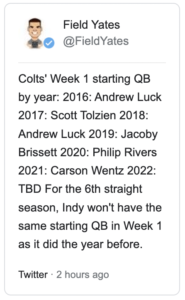 Wentz, 29, had a great bounce back season in Indianapolis. After leading the league in interceptions on the Eagles—with 15—in 2020, Wentz threw for 3,563 yards and 27 touchdowns with only 7 interceptions. That is the same TD-INT ratio that he had in 2019 with Philadelphia.

The Commanders have now moved on from Ryan Fitzpatrick and Taylor Heinicke. Fitzpatrick, 39, played part of Washington’s 1st game this season with only 6 pass attempts before getting injured and not playing 1 snap the rest of the season. That was was where Heinicke, 28, stepped in and played nearly every single game since the Fitzpatrick injury. He threw for 3,419 yards with 20 touchdowns and 15 interceptions. Both of them will likely find new homes this offseason. Washington finished the season with a 7-10 record.

The Colts are now with another starting quarterback. Sam Ehlinger, 23, will most likely be the starter if Indianapolis makes no moves with James Morgan, 25, backing him up. Ehlinger threw no pass attempts in his rookie season in 2021. Morgan has yet to play an NFL game after being a 4th round pick in 2020 by the New York Jets. Morgan has spent time with Jets, Panthers, Steelers and now Colts who signed him on December 6th, 2021. That’s probably not who the Colts want as their QB’s though. With Russell Wilson and Aaron Rodgers off the market, players like Jacoby Brissett, Andy Dalton, Ryan Fitzpatrick and others could be the move for Indianapolis. Or they can possibly take a Kyle Pickett or Matt Corral in the draft if they’re lucky.

Washington will have to pay all of Wentz’ money of 28 million. While it’s not at a cheap cost, paring Wentz with a 1,000 yard receiver like Terry McLaurin will be fun to watch!

To hear my thought’s on the trade and my thoughts on the Russell Wilson trade, Aaron Rodgers contract and more, check out my Cool Sports Network episode tonight!

Breaking News: Khalil Mack is in Hollywood!Wiz Talk with Chase: Previewing the Wizards @ Clippers Game! How will the Wizards start their west coast trip?
In
NFL