Kenny Atkinson is the new head coach of the Charlotte Hornets—and it’s such a smart move!

Kenny Atkinson just signed a 4 year contract (money to be determined) with the Charlotte Hornets to become the organization’s 12th ever head coach. The Hornets fired their 4 year head coach with the team, James Borrego, shortly after Charlotte’s year ended in their play-in loss to the Atlanta Hawks. Atkinson is a major upgrade. Atkinson is currently an assistant on the Golden State Warriors, as he looks to get his 1st championship ring.

Before going to Golden State, Atkinson, 55, was an assistant for the Los Angeles Clippers during the 2021 season. But even before that was Atkinson’s only head coaching gig before Charlotte, as he spent the 2016-17 season until the majority of the 2019-20 season with the Brooklyn Nets before being fired just 4 days before the NBA shut down due to COVID-19. However, there is no true conclusion why he got fired after spending almost 4 full productive years with a team that no hope of contending for the playoffs before he came.

He did a decent job in Brooklyn. Even though his 118-190 record with the team says otherwise, he led Brooklyn to their first playoff appearance since 2015 when they made it in 2019. However before he came, Brooklyn had been coming off a 21 win season with no young talent what so ever. Then came Atkinson in 2017, with their 2016 1st round pick Caris LeVert and newly acquired young gun Spencer Dinwiddie. LeVert struggled and the Nets only won 20 games in Atkinson’s 1st season. Not good at all. However, they had not accumulated enough talent to consider themselves playoff contenders yet. That 2017 offseason however changed everything. Brooklyn traded their 9 year veteran and all time leading scorer, Brook Lopez and their late 1st round pick, Kyle Kuzma to the Lakers in exchange for a 2 year pro, D’Angelo Russell and Timofey Mozgov.

No offense Timofey, but no one really mention’s you in this trade. It was all about D’Angelo Russell! They also drafted Jarrett Allen with the 22nd pick in that draft, creating a group of four young pieces to continue to build around with Russell, LeVert, Allen and Dinwiddie. The next season Brooklyn won 8 more games, but still finished as the 12th seed in the Eastern Conference. It wasn’t until the 2019 season where Brooklyn made the jump. The defying gravity jump. D’Angelo Russell went from 15.5 points and 5 assists to 21 points and 7 assists and his 1st all star appearance. LeVert scored about 14 points, Dinwiddie scored 17 points and 5 assists and Allen had 11 points and 8 rebounds. Brooklyn won 42 games which put them as the 6th seed in the Eastern Conference. Despite losing to Philadelphia quickly in the 1st round, it was huge success for a team that hadn’t racked up that amount of wins since 2014. Their SRS also ranked as their best since 2013, which was the Nets 1st year relocated to Brooklyn.

The next season Brooklyn finished as the 7th seed, despite having a very average roster due to long lasting injuries. They traded D’Angelo Russell and other role players to the Nets for Kevin Durant in a sign and trade and also signed Kyrie Irving during the 2019 offseason. However, Durant was out for the season recovering from a torn achilles injury in game 5 of the NBA finals with the Warriors. Irving only played 20 games that season as well. And Brooklyn still finished with the 7th seed. Again, most people don’t know why Atkinson was fired in that season. 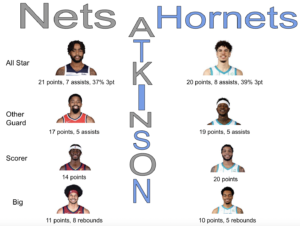 So possibly a surprising season for the Hornets in 2023 with Atkinson in charge. Kenny Atkinson is one of the most underrated coaches in the NBA and seeing the success he had in a similar situation in Brooklyn, I can only imagine what he’s going to do with another young, borderline playoff team with the Charlotte Hornets. Michael Jordan may have not made smart moves with the Wizards front office, but he’s sure making good ones now in Charlotte!