Jimmy Butler is setting all time great records…but does it matter?

Game 6 of the Eastern Conference Finals made my brain explode when I saw Jimmy Butler’s stat line. 47 points, 9 rebounds, 8 assists, 4 steals, 1 block, 16-29 shooting from the field, 4-8 shooting from 3 and 11-11 shooting from the free throw line. That is insane. In fact, it ranks as Butler’s highest amount of points in a playoff game and would rank 3rd among Butler’s career high in points if you included the regular season. His next best playoff scoring game was during this year’s playoffs. And his 3rd best was also in this year’s playoffs. And so was his 4th best. In fact, Jimmy Butler’s amazing performance in Game 3 of the NBA finals in the 2020 bubble now only ranks 5th among most points all time in a playoff game in his career:

Jimmy Butler has also played well according to the advanced metrics. He is 1st in the NBA so far this playoffs in:

The only players in the NBA history to lead in all 6 of these categories during the playoffs are:

Jimmy Butler is putting himself in categories that only the 3 greatest basketball players ever have accomplished. His Game 6 performance may also rank better than an all time great LeBron playoff performance when he was in Miami, which was coincidentally a Game 6 in the Eastern Conference Finals against Boston: 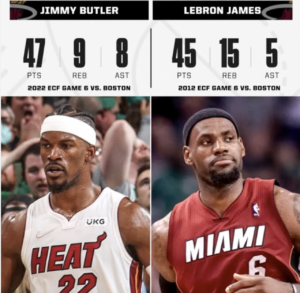 Jimmy Butler’s total averages in the playoffs this year look like this:

Let’s compare those numbers to 1998 Michael Jordan during his championship run:

Jimmy is outplaying Jordan’s 1998 playoff run this season in 6 of those categories, while Jordan only beats him in 1 category. I may also add the 2 other categories they tied in, Butler had a slight advantage. Jimmy Butler has been playing to the same caliber or out playing some all time great legends in the playoffs in their best playoff seasons!

So, will Miami win tonight? No. I don’t think they will. Jayson Tatum will get more field goal attempts in the 4th quarter than 1 and Al Horford and others won’t shoot that bad from the field. I also don’t expect Butler to have the performance he had last game, but still will be the deciding player on who goes to the NBA Finals. But, it doesn’t matter. Butler has had an unbelievable playoff year and it compares to all time great playoff seasons that only all time greats have achieved. At the end of the day, that impact isn’t going to go away if Boston improves. That has nothing to do with Butler. No matter what happens tonight, what Butler has done in this year’s playoffs is extraordinary and 1 game won’t take away anything from it!

Is Gerrit Cole overpaid and is it because of Houston’s cheating scandal?NBA Mock Draft 2.0!
In
NFL