Game 6 Preview: Will tonight be the final night?

Tonight is game 6 of the NBA finals between the Boston Celtics and the Golden State Warriors. Tonight could be a night that goes down in the record books. The Golden State Warriors have a chance to close out the series tonight with a win. If they do, it would be only the 2nd time a team other than the Celtics would close out the NBA championship in Boston. The only other team to do this was Magic Johnson and the Los Angeles Lakers in 1985. And that is not because Boston hasn’t made it to the finals a lot. They’ve made the finals 21 times! But, will they? Will Golden State close out the series tonight in the TD Garden? The answer is no!

Boston will win tonight’s game and force a game 7. But how? Well, all of the statistics point towards them winning tonight. One of Boston’s biggest reasons for their lack of success in this series is because Jayson Tatum has been very inconsistent. However, when facing elimination in the last 3 postseasons, Tatum has averaged 30 points, 9 rebounds and 7 assists, while shooting 42% from 3pt range. And despite having other shooting weaknesses during this series, Tatum’s 3pt shooting is one of the top 5 3pt shooting percentages in NBA finals history, for players who have taken 40 or more attempts from that range.

The Celtics are also 7-1 following a loss and are 3-0 when facing elimination this postseason. The Warriors also have trouble closing out series’ so far. The Warriors are 0-3 in their first chance to close out the series so far in this year’s postseason. Stephen Curry has also only averaged 22.33 points in these games, which is almost a 5 point drop off from his points per game average in the playoffs overall. The Celtics also won 68.29% of their home games during the regular season.

Yet, something that could keep Golden State in it is the number of what game is this: game 6. And Klay Thompson knows how to perform in game 6’s. Thompson has averaged 26.2 points per game in game 6’s since 2018. That includes three 30+ point performances in this stretch as well. He is also shooting 51.7% from the field and 56.9% from 3 in this stretch. Well, “game 6 Klay” is not going to have a “game 6 Klay” type performance. Thompson has shot just 38% from the field in this series, which is his lowest field goal percentage in any series in this year’s playoffs.

But, it’s not just the statistics that will lead Boston to victory. It’s common sense. Stephen Curry had his worst performance of the finals in game 5, which became his 1st game in 233 games where he did not make a 3pt shot. Yet, Golden State still won that game because of performances from Andrew Wiggins and Klay Thompson. But then at the same time, when Thompson and Wiggins had weaker offensive performances in game 4, Curry had 43 points and 10 rebounds. They need him to play somewhere in the middle, so other rotational players aren’t playing great for Golden State. But I think that’s realistic.

Because, if Curry plays better, I don’t expect Wiggins to play well at all on offense. Wiggins points in the playoffs have dropped by an average of 10 after a 20+ point performance. He’s too inconsistent for me to trust him. And with Wiggins shut down, Curry has to carry such a big work load. And after an 0-9 3pt shooting performance, are we certain he can lead them to victory that way? Then on the offensive side of the ball for Boston, Tatum is going to have 40+ points!

I understand that is a bold prediction. But let me explain. Not only does Wiggins points go down after a good game, so does his game score. In fact, Wiggins game score drops by 11.26 after 20+ point performances in the playoffs this season. That includes defense. He simply is too inconsistent for that side of the ball. And guess who is going to being guarding Tatum like he has been the entire series? Wiggins! And I also mentioned Tatum’s numbers facing elimination earlier. Look at other players on Boston and their numbers when facing elimination in this year’s playoffs: 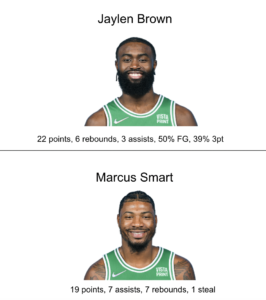 Everything points in the direction of Boston for tonight’s game. I’m not saying this because I’ve had Boston winning the championship since February. I truly believe that they have the talent, the experience and IQ to beat Golden State. They also have all of the statistical advantages that show why they’re going to win tonight. Give me Boston 113-108

It’s Deja Vu all over again…Breaking News: The Mavericks are finalizing a deal to bring Christian Wood to Dallas!
In
NFL